Usually, we associate the word “wearables” with smartwatches or fitness trackers. Actually, there are other devices although they are less popular, for example, wearable cameras. Normally, they are attached to the user or worn as glasses. Now, there is another form of a wearable camera which seems much more fitting. Here is brief review of the New Necklace Wearable Android Camera. 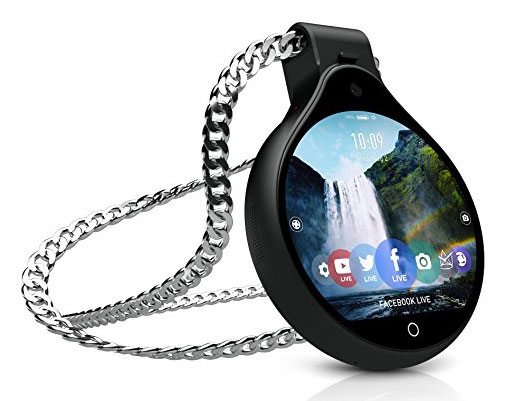 Ubiquiti Networks introduced the FrontRow wearable camera which is made in the different form factor. Basically, it’s a necklace, so it’s a fashion accessory combined with a tech device. The FrontRow is quite compact weighing only 55g. What’s more, it is in fact an Android device fitted with a 2-inch touch-sensitive screen and two cameras: 8MP on the front and 5MP on the back.

The camera captures everything that happens in front of the user. For that, the front camera has a 140-degree lens to deliver good-quality pictures. Plus, it’s possible to take clear photos in motion due to built-in accelerometers. The gadget can be controlled with an accompanying smartphone app which also contains all photos with the possibility to edit them or share on social media.

Another important thing is battery time – the FrontRow lasts for 2 days in standby mode. Keep in mind that other modes, like live streaming or Story Mode, drain battery faster. The camera is then recharged in only 20 minutes via USB-C.