It’s safe to say that almost everybody in the world heard about “Star Wars”. When the first movie came out in 1977, it was a revolution in cinematography. Over time, the Star Wars franchise has become a cultural phenomenon with millions of fans all over the world. But why do we write about “Star Wars” all of a sudden? Because these movies also inspired a whole bunch of gadgets and today, we’re gonna review one of them. 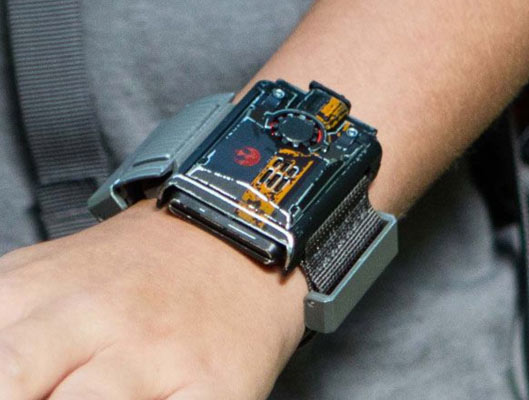 It’s the Force Band made by the company Sphero. As any earnest Star Wars fan knows, the Force is a mysterious entity that surrounds every living thing and gives a Jedi Knight power. But with Sphero band you can have a little taste of what it’s like to be a Jedi. If you’ve seen “The Force Awakens”, you probably know about the droid BB-8. Sphero actually made a BB-8 toy which is controlled by a smartphone app via Bluetooth. But if you have the Force Band, you can rely on gesture control. To make the droid move, all you need to do is to stretch your hand. Once you master the control, a faithful droid companion will follow you everywhere.

Apart from that, the band can reproduce memorable Star Wars sounds. You can play with a lightsabre or a blaster, and the band will play these sounds due to a built-in speaker.

Another interesting thing about the Force Band comes with a smartphone app (available for iOS and Android devices). The app offers you all users a fun game where you have to look for certain items. It’s a bit like PokemonGo only instead of pokemons, you’re seeking different virtual relics. Yes, the band doesn’t have a great battery time – only 60 minutes. But it comes with a microUSB cable, so that you can charge from a power bank or even a smartphone charger.

Of course, Sphero Force Band is mostly for kids because they love playing with toys. But if you’re a real Star Wars fan and you love everything that reminds of these movies, the Force Band a great item of Star Wars memorabilia. Strap it on, have some fun and forget about all stress of daily life. And may the Force be with you. Wearable for Star Wars fans is a really amazing gadget.

Virtual Laser Keyboard Projector - How Does it Work