Unmanned Taxi Made the First Flight in Dubai

The idea of making unmanned flying taxis already has a few companies working on it. Apart from that, this concept appealed to the authorities of Dubai. What’s more, they seriously decided to make Dubai the first city in the world where this transport service will work. In fact, the project is developing so quickly that the first test flights of flying taxis have already started. 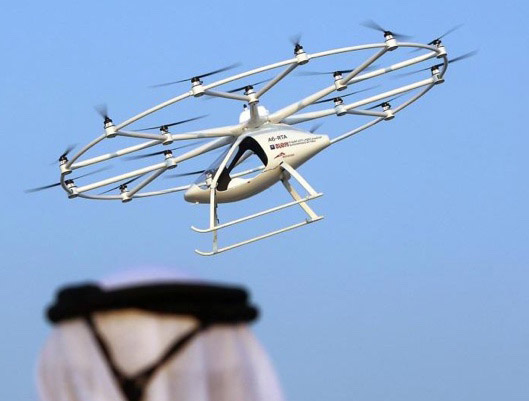 The first taxi flight took place as a part of creating a fully functional service available for residents and visitors of Dubai. The aircraft was made by the German company Volocopter which specializes in drones. The taxi has two seats inside and it rises in the air due to 18 propellers. The taxi complies with all safety standards and includes a lot of security systems preventing emergency situations. Plus, it has a backup battery just in case and a couple of parachutes for passengers.

The first test flight, of course, was carried out remotely, without people in the cab. During the test flight, a taxi flew to the height of 200m above the city and hovered for five minutes. The launch was supervised by Crown Prince of Dubai Hamdan ibn Mohammed Al Maktoum. For the most part, the test launch was organized just for him. He is confident that this “transport of the future” will make Dubai even more technologically advanced and comfortable for its inhabitants.