All About Tesla Model S Car

For all petrol (or diesel) vehicles, fuel consumption is an important characteristic showing how much distance per one unit of fuel a vehicle can cover. The situation with electric cars is basically the same, only here we’re talking about mileage from a single charge.

Usually, electric cars don’t go for too long but new models are reaching impressive heights. Just recently, Tesla announced its new electric car and now, the team of Italian Tesla owners decided to check how much the new Model S can drive on one charge. The team used the method when a driver was maintaining the necessary speed with minimum braking.

The result was more than just impressive – Tesla Model S set a new record for electric cars. It ran for 1 078km on a single charge. This is a historical moment for all electric cars because Tesla Model S became the first one to surpass the 1000km limit. The test was held in South Italy. 5 people participated in the experiment that lasted for 29 hours.

In order not to compromise the integrity of the experiment, the charging port on the car was sealed in advance. Also, the record was achieved with another type of tyres and a switched-off air conditioning. In any case, electric cars are becoming even more reliable and long-lasting, so we may see more of them in the future. 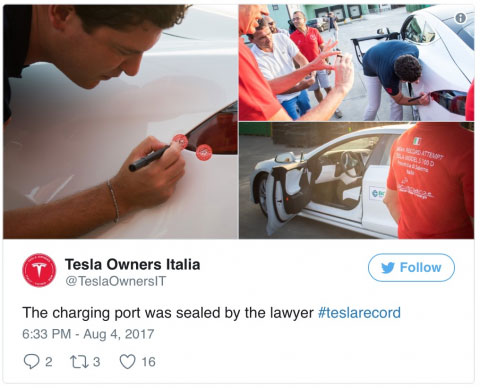