Engineers at Carnegie Mellon University in Pennsylvania developed quite an innovation that can change the future of projecting – most innovative projecting device. Their device can be screwed in a lamp or a chandelier, like a lightbulb. After that, it projects various computer apps and interfaces onto various surfaces. These virtual screens can be controlled with gestures.

This type of technology is not the first of its kind, prototypes of devices that project computer interfaces on different surfaces have existed for a long time. However, most of them have one disadvantage – the picture can be projected only on flat surfaces. 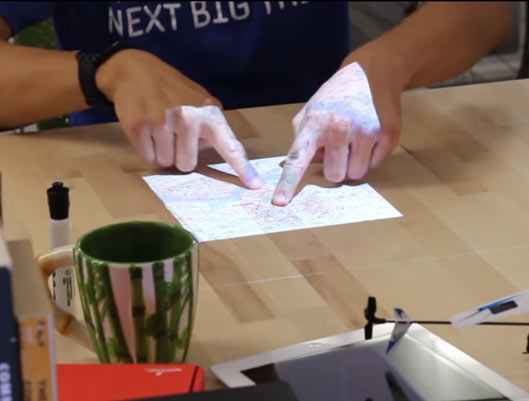 Unlike other technologies, this system, called Desktopography, is able to locate free space itself and project program windows onto it. Also, these windows can be moved, zoomed in or “tied” to objects on the table. In the case of “tying”, the window will follow the object that it’s tied to, for example, a book or a laptop. If the user places an object on the projected window, it automatically moves to the side.

This projecting device is connected to a PC, equipped with a depth camera and a standard lamp socket, so it can be installed into a table lamp or chandelier. For processing data from the camera and correcting the image, there is a special PC program.

According to the developers, the presented device will replace additional monitors in the future and users will be able to work with several screens without too many devices.