The new version of Neural Compute USB Stick was announced by Movidius (last year Intel bought that company). Neural Compute Stick is a miniature computer that can do simple tasks of artificial intelligence (pattern recognition). 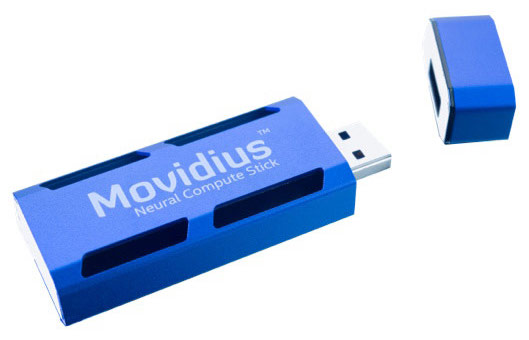 The new model Movidius as the last predecessor Fathom has processor Myriad 2 with the capacity of 100 gigaflops. At the same time Movidius differs from Fathom as it has bigger random access memory up to 4 Gb instead of previous 512 Mb and 1 Gb and scalabity, that allows to use up to 4 devices at the same time (maybe in future it will be possible to use 6 or even 8 devices).
The technology of Myriad 2 was announced 3 years ago and is used in a quadrupter DJI Phantom 4. The recommended price of Movidius NCS is 79$.