Home » MORE » Store on Wheels Is Opened in China
MORE

Store on Wheels Is Opened in China 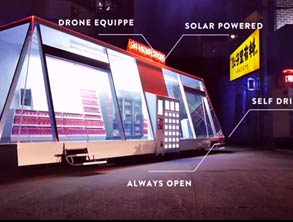 The Swedish company Wheelys has begun testing an autonomous mobile store Moby on the streets of Shanghai. The store called Moby is a relatively small pavilion on wheels that has place for no more than four people. The store receives energy from solar panels. To become a buyer of Moby, you need to install a special smartphone app and attach a credit card to it.

During a working day or night, the store drives around certain streets and people can call it using a smartphone, just like a taxi. A smartphone will also be required to get inside and scan bar codes on selected products. When you exit the store, the app will automatically deduct the cost of purchases from the attached card. Built-in sensors allow the store to track the number of remaining goods and, when necessary, it is independently sent to the warehouse to get more goods.

Right now, Moby is being tested in metropolitan areas but such autonomous shops can be used in small towns and rural areas where there are no regular stores and local people have to go shopping in neighbouring cities. According to preliminary estimations, one store like that will cost about 30 thousand dollars without including maintenance costs.

The Best Budget Hair Clipper for Home and Professional Use