It’s hard to surprise mobile device users with sophisticated accessories now. For example, the market is getting filled with multi-purpose smartphone cases which have various additional features. For instance, a new fundraising campaign was just launched on Indiegogo. The novelty is called Duo Slim and it’s an iPhone case that doesn’t only increase the battery life of an Apple smartphone but also expands its musical capabilities. Simple it’s speaker cover for iPhone 8 Battery Case. And here is brief review. 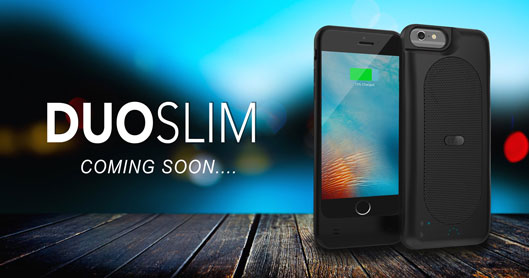 In addition to the battery in the case, there is also a pair of speakers with a total power of 3W. According to the developers, users will forget about purchasing wireless speakers. With Duo Slim and its additional charge from the battery, iPhone owners will be able to enjoy their favourite tracks up to 8 hours.

Also, the case has a standard 3.5mm jack for connecting headphones, and a Lightning port, allowing users to charge the accessory with the same cable as the iPhone. As mentioned above, developers are currently raising funds for launching Duo Slim onto the market. You can pre-order this iPhone case for $49. First shipments should start in October.