The Chinese drone Caihong (CH), powered by solar batteries, made a successful flight at 20km altitude, reports China Daily. The publisher also notes that CH is the first Chinese solar drone capable of flying at such heights. Its wingspan reaches almost 45 meters. According to the drone developers from the China Aerospace Science and Technology Corporation, the test flight lasted more than 15 hours and ended with the drone’s soft landing. 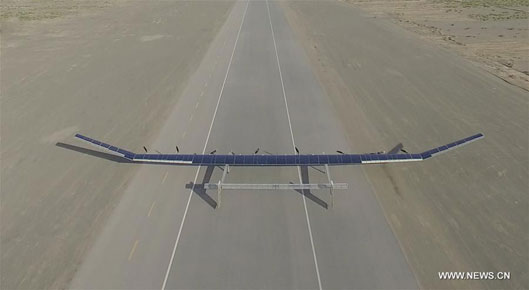 Thanks to the successful launch of CH, China became the third country in the world after the United States and Great Britain with their own solar-powered drones which can fly at 20-100km altitudes.

In the future, such drones may serve as quasi-satellites capable of transferring data and providing cellular communication and Internet access in remote areas and zones of natural disaster. Also, such drones can be used to monitor the Earth’s surface.

By the way, one of the companies, involved in making such drones, is Facebook. Last year, the company reported on the successful test of the Aquila drone which has a wingspan of 34m. However, it was later revealed that the drones received serious damage during landing. In any case, more solar-powered drones will make sure that Internet will reach even the farthest corners of the world.