Earlier, we’ve written about the Israeli company StoreDot which specializes in fast charging. Just recently, they showed how their own technology FlashBattery can charge an electric car battery in just 5 minutes. But StoreDot can provide the same service for mobile device users. A couple of years ago, the company announced that their technology can charge a smartphone in less than 5 minutes. What’s more, StoreDot’s website offers two interesting accessories which we’re going to talk about now.

The first product is an iPhone 7 case and the second one is a power bank. Both gadgets work on the aforementioned technology FlashBattery which uses special lithium-ion batteries and makes charging as fast as lightning. Basically, FlashBattery can provide charging speeds which are 10 times higher compared to regular accessories. 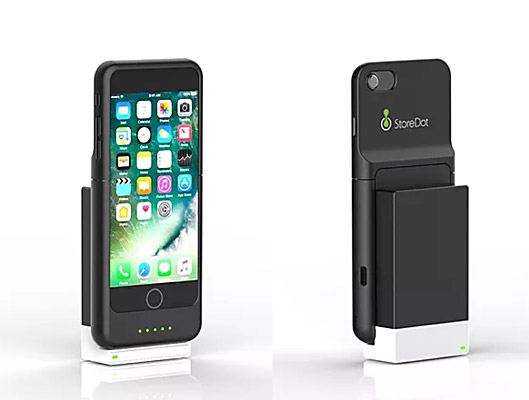 For example, the iPhone 7 case doesn’t only protect the smartphone but also gives it additional charge in urgent situations. The case itself charges fully in 5 minutes providing 8 extra hours of life for your smartphone, even on the road. For charging the case itself, there is the FlashCharger – a portable 150W charger with a built-in electric connector. This accessory is compact and very safe, as it comes with surge protection preventing short circuit and keeping your smartphone in a good condition.

Furthermore, the FlashCharger accompanies the StoreDot power bank as well. The FlashBattery power bank is completely unique among its competitors because it charges in only 5 minutes. The accessory is equipped with a miniUSB and regular USB ports for connecting any mobile device. The power bank is reliable, durable, and very portable.