This Smart Wireless DLP H96-P Mini Projector is a small size and portable gadget that, to put this review in short, will give you infinite pleasure from large display anytime and anywhere. You can take it to your country house or home, and enjoy a long movie or an epic video game battle.
The device runs on the Android 5.1. This OS may sound outdated, but it is more than enough for such a device as a projector. Using the DLP technology to ensure images stable and bright. Digital light processor (DLP) is a general trend in supervising and controlling system.
As the manufacturer says, DLP technology helps to achieve high fidelity image and a clear, bright and vivid picture. The projector supports depth customization system, as well as office, online video, online games.

Another big benefit is its wireless connection with phones, and the fact that DLP imaging system requires no dust removal. The projector is quite energy saving due to LED light source. 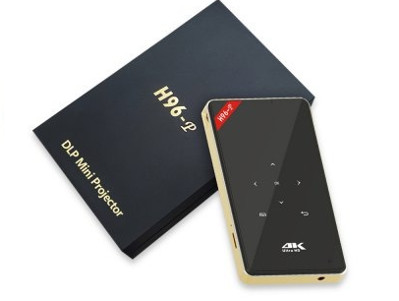 Mini-projector has a built-in 4000mAh high energy lithium-polymer battery for 2 hours of video casting which can also serve as a power-bank for phones and other devices.
I would also notice that it is well-designed and nicely assembled. Powerful
hardware enables you to play even “heavy” video games. As I’ve experienced, both Bluetooth and WiFi modules work well. I also like sensor buttons on the core and compact remote.
As for the flaws, the projector doesn’t recognize installed apps, for example Kodi. Secondly, YouTube account doesn’t automatically connect from the Google account.
To summarize, this projector is more than enough for a domestic use, provides good image quality with more brightness than one can expect for such a little device, and has a battery enough for an almost 2 hours movie. Perfect option (maybe one of the best on the market) for the money. 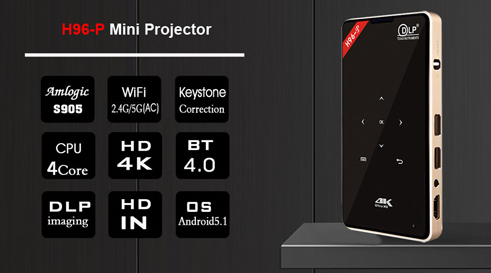