Soon will be launched a SGNL device which will probably make a dream come true. The device is created by the company Innomdle Lab. Actually SGNL a normal thong which is able to communicate with your smartphone on Bluetooth via which receives a voice signal from phone. Then SGNL generates vibrations by means of Body Conduction Unit technology which then allows to transmit a signal through a hand directly to a finger-tip.

Everything that needs to be made after that to bring a finger to an ear, then the sound will amplify in closed space thanks to what it will be possible to communicate comfortably by smartphone even in quite noisy places. To prepare the device for release in February of the next year, Innomdle Lab launched a campaign on Kickstarter. 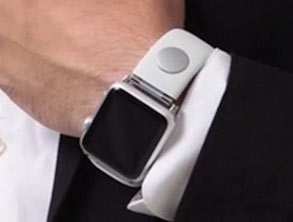