Making a flexible display is a rather complicated task. Many companies are trying to create a proper technology in various ways with one purpose – keep the solid base of the screen that would also allow bending and twisting without damaging its structure. One of the options her is a hi-tech fabric. In fact, there is a breakthrough in this area – scientists from Korea Advanced Institute of Science and Technology (KAIST) were able to develop displays based on organic diodes woven into clothing. 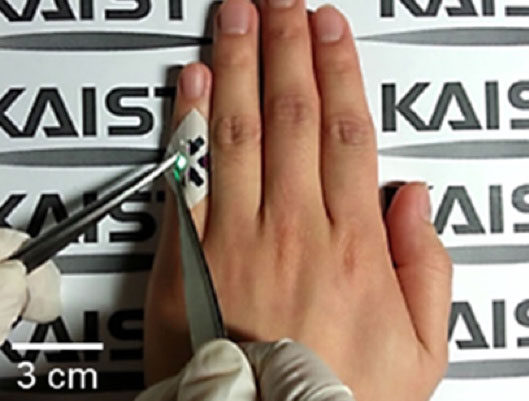 Initially, the scientists experimented with thin polymer layer compatible with diodes. However, this proved to be ineffective and there was another idea. Koreans used a special immersion method where all polymer LEDs were placed evenly all over the entire surface of the fabric. As a result, the scientists managed to get bright displays on fabrics of various densities, including thin ones.

According to the head of the KAIST research lab, the screens, built into the fabric of our everyday clothes are no longer the technology of the future. Although the displays themselves are already created, scientists still have to solve many problems. Any clothes should be regularly washed, so you need to make the screens resistant to water and aggressive substances. In addition, there is a problem with the power supply.