Being one of the leaders on the smartwatch market, Samsung has a great reputation with their Gear line-up. Nevertheless, the company doesn’t stop developing. According to PatentlyMobile, the company plans to completely rethink their smartwatch range and introduce unique products in 2017. The information arises from published patent applications, filed by company’s lawyers in the last week of 2016. These smartwatches (two devices planned) will be totally different both in design and functionality.

The first smartwatch, resembling fitness tracker Charm, boast intuitive control and innovative features. Compared to other smart watches, which contain all the software inside the body, this one will be fitted with a smart band. It will allow users to operate the watch with simple movements.

The second device is bigger and even more intelligent. According to the patent application, this smart product can hardly be called a watch – the body will be made of a curved AMOLED matrix, so that users could wrap it around the wrist like a bracelet. Samsung has a patent on such flexible display technology, so similar devices are expected to be unveiled in 2018. The news is quite encouraging. Apparently, we may soon witness a “revolution” on the smart wearable market. 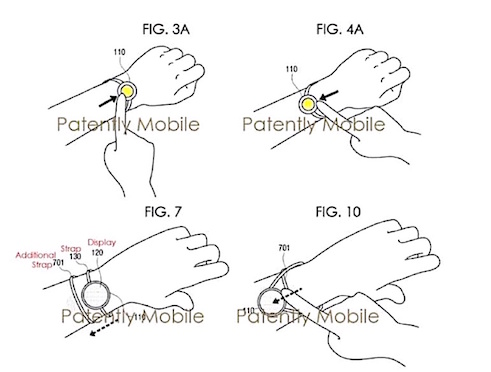