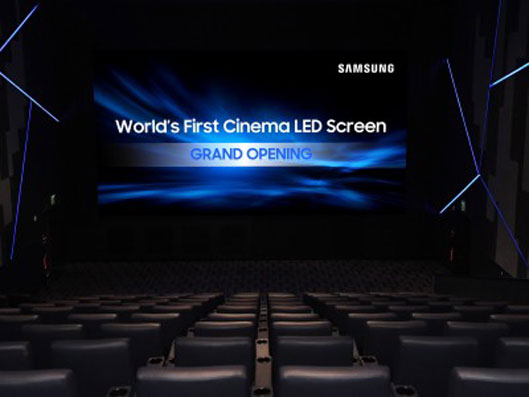 In modern movie theatres, in order to play a movie, people use projectors that transmit the film onto a screen. However, some say that this way isn’t totally effective at delivering the best video quality. A more suitable option would be an LCD screen in a movie theatre but it costs a lot of money. Still, the first steps towards this direction are being taken.

For instance, Samsung just announced that it will install an LCD screen in one Korean movie theatre called Lotte Cinema World Tower. This is the first time in the world when an LCD screen is used for commercial purposes. The 10.3m screen supports a wider dynamic range HDR providing bright and high-quality picture and reproducing the content with brightness almost 10 times higher than in standard film projectors, without any optical distortion and interference.

Plus, the sound will be more realistic due to the cooperation between Samsung and Harman. The acoustics system includes powerful speakers located at the edges of the screen, exclusive audio processing technology and the JBL Sculpted Surround system, providing the most accurate transmission of sound.

Obviously, the representatives of this Korean movie theatre are excited to work with Samsung. If everything goes well in Korea, this technology might easily spread to other countries. After all, everyone deserves good-quality movies.