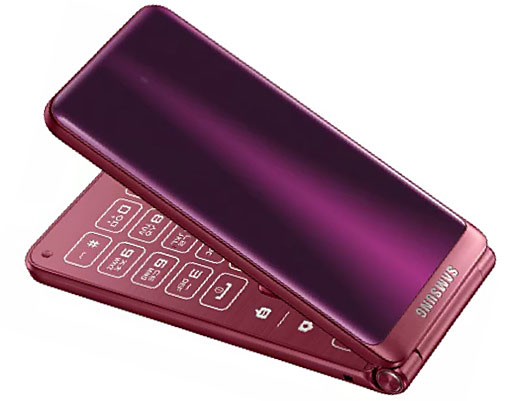 It’s called Folder Flip 2 and it’s quite a big device especially when it’s flipped open. Unlike W2017 phone, that we’ve already reviewed, this one doesn’t have two displays. Instead, there’s only one display and a numeric keypad. The phone itself runs on Android 7.0 Nougat. Interestingly, despite having a keypad, the display is still touch-sensitive. It has a diagonal of 3.8 inches with a resolution of 480 x 800 pixels.

Among other available features, there are a quad-core Qualcomm Snapdragon 425 processor, 2GB RAM, 16GB storage (expandable up to 256GB), two cameras (8 and 5 MP) and a 1950mAh battery. Also, one version will come with LTE support.

Samsung Galaxy Folder 2 goes on sale soon and it will have two colour options: pick and black. Considering that there are some flip phones fans left, the phone may have some popularity.