The rumours about flexible smartphones from Samsung have been going around the Internet for quite some time. Still, the Korean company hasn’t actually released anything. However, a mysterious smartphone, code-named Samsung Galaxy X and equipped with a foldable screen, may appear on the market between Q3 2017 and Q1 2018.
Here is brief review.

According to bluetooth.com, the device has already received certification in accordance with Bluetooth SIG standards and is ready for further registration procedures. Earlier, we learned that the alleged Galaxy X also received the approval of Wi-Fi Alliance. That document reported that the model was running Android 6.0.1 Marshmallow and had Bluetooth standard 4.2.

Due to the fact that this set of specifications doesn’t really comply with the status of a flagship device, Samsung will probably change them for the better by the time of the official release.

Initially, as a part of the Project Valley Project, Samsung was testing a prototype of a smartphone with a flexible design. However, as it turned out later, the company was forced to abandon the design because of its inconvenience – users would have to unfold it dozens of times every day. That’s why Galaxy X will most likely consist of two panels, joint with a hinge. 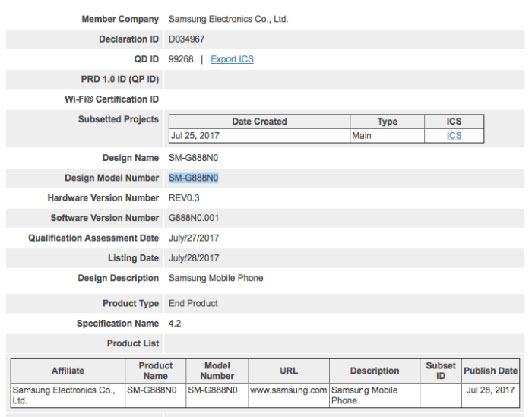