Blogger Evan Blass, specializing in leaks about various gadgets, published on his Twitter page a press-release of the upcoming smartphone Samsung Galaxy Note 8, which is expected to be presented at the end of August.

Judging by the presented photos, Samsung Galaxy Note 8 resembles the previously presented devices Galaxy S8 and S8+ in many ways. Note 8 received a similar design and a screen that takes almost the entire front surface. And of course, the phone comes with a traditional included stylus S Pen.

According to other leaks, Galaxy Note 8 is to be equipped with a 6.3-inch display (18.5:9 aspect ratio, like the Galaxy S8). It is assumed that the smartphone will receive a Qualcomm Snapdragon 835 or Exynos 8895 processor. The smartphone’s RAM will be 6 or 8 GB, and the internal memory reach up to 256 GB.

The presented photo confirms rumors that Galaxy Note 8 may become the first Samsung smartphone with a dual camera. The main camera will supposedly receive a 12MP wide-angle module and a 13MP telephoto module that will provide a 3x optical zoom. It was also previously reported that the smartphone will receive a 3300 mAh battery and will run the Android 7.1.1 Nougat operating system. 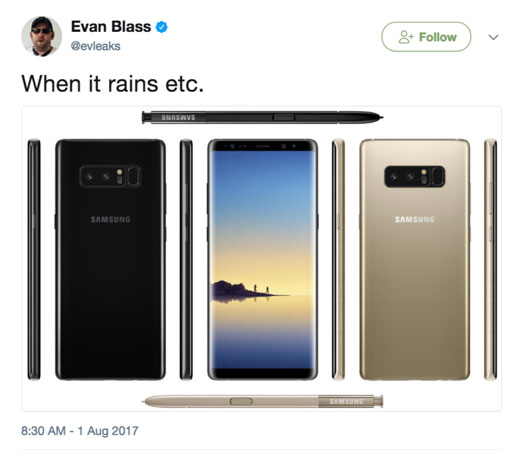