During the IFA 2017 Panasonic introduced a fully transparent OLED display. The functional prototype of the device demonstrates how TVs will look in the future.

Basically, the display like a huge mirror which transforms into an OLED TV with 4K resolution after the user pushes the button on the remote. The prototype at the Panasonic stand showed what opportunities this modern technology offers. Besides, in addition to being used as a home TV set, the technology has other possible applications. That’s why Panasonic plans many scenarios for using transparent screens in public space. 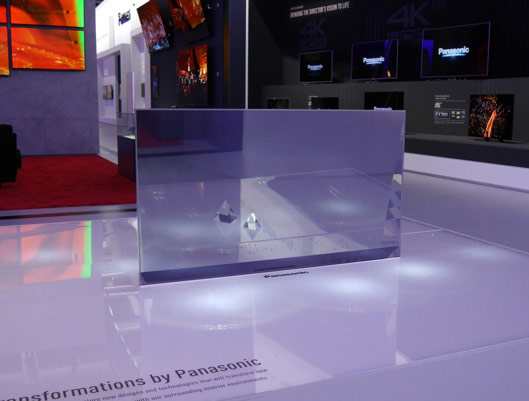 “At the previous IFA, we showed an early prototype of a smart transparent screen,” says Michael Langbehn, head of Panasonic’s PR service in Germany. “The new prototype received 4K resolution and OLED technology, demonstrating how quickly technology is developing today.” Although the release date for a transparent OLED TV wasn’t revealed, the model shows how intensively Panasonic is working on the technology.

Other scenarios for transparent screens include, for example, interactive advertising spaces –shop windows or glass doors in stores. At the IFA stand, Panasonic also showed how transparent screens can be used with a touch-sensitive coating, for instance, on a fridge. The glass door can contain information about different products or cooking recipes.