We always try to follow the news on the mobile accessory market but some segments don’t feature particularly eye-catching announcements. For example, power banks. However, a week ago we’ve been proven wrong – NitroQ introduced a power bank of the same name which is quite different from its analogues.

NitroQ has a regular aluminium body and 5000mAh. But most importantly, manufacturers say that this power bank is all about speed – it gets charged 10 times faster than all other products in this category. 7 minutes of charging from NitroQ is enough to fully power one smartphone. In case you have two mobile devices, you won’t spend more than 15 minutes charging them up. This high-speed charging becomes obvious if you look at the numbers: the input voltage of this accessory is 12-20V. 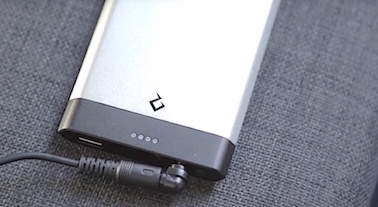 NitroQ power bank has a compact size, easily fits in a pocket and weighs only 196g. Along with the fast charging, NitroQ has everything for any active user or a traveller.

Right now, NitroQ is raising funds on Indiegogo where users can learn more about it and pre-order the device for $59. First shipments are starting in August.