The Internet is full of videos where drones fly and capture beautiful and smooth clips while performing tricks at the same time. Seems impressive, right? However these drones rely on the data received from the GPS. But what if the GPS cannot be used? Well, Engineers at the University of Pennsylvania are doing just that, developing a program for drones to fly without a GPS.

To do this, they took twelve small quadcopter devices weighing 250 grams, each equipped with a flight kit by Qualcomm Snapdragon. Each unit is equipped with a microcomputer based on a quad-core processor and includes a VGA camera with a viewing angle of 160 degrees, two VGA-cameras operating in pairs, and a 4K-camera required for capturing beautiful videos. 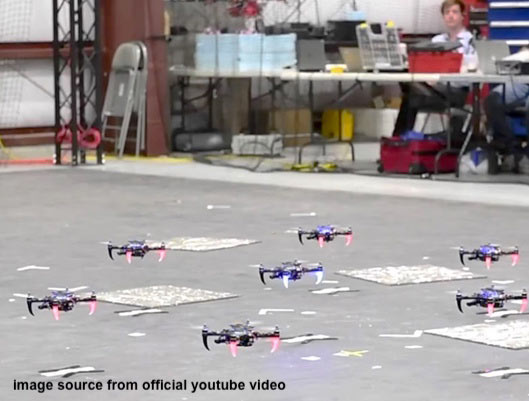 The coupled cameras allow the drone to track objects around them, determining which way to move. One disadvantage the engineers encountered was that with the increasing distance the on-board AI does not always correctly calculate the distance to these said objects. However the developers managed to eliminate the problem, now at a distance of up to a hundred meters the device calculates the distance with an error of up to half a meter.

Due to this, the drones moving in a flock do not collide, they keep the distance and the formation well even under difficult conditions. This was shown by the results of tests, in which the drones had to fly and orient themselves in windy and cloudy weather.