In the third quarter of 2017, the tablet market showed negative results again, for the 12th quarter in a row. According to the report by IDC, the total amount of tablet shipments from the five major companies decreased by 5.4% and fell to 40 million devices.

IDC also says that this tendency occurred because of the growing demand for smartphones, increasing time for updating tablet line-ups and stronger positions of regular PCs. At the same time, it’s obvious that the market is taking a direction towards transformers – 2-in-1 devices are getting more popular. 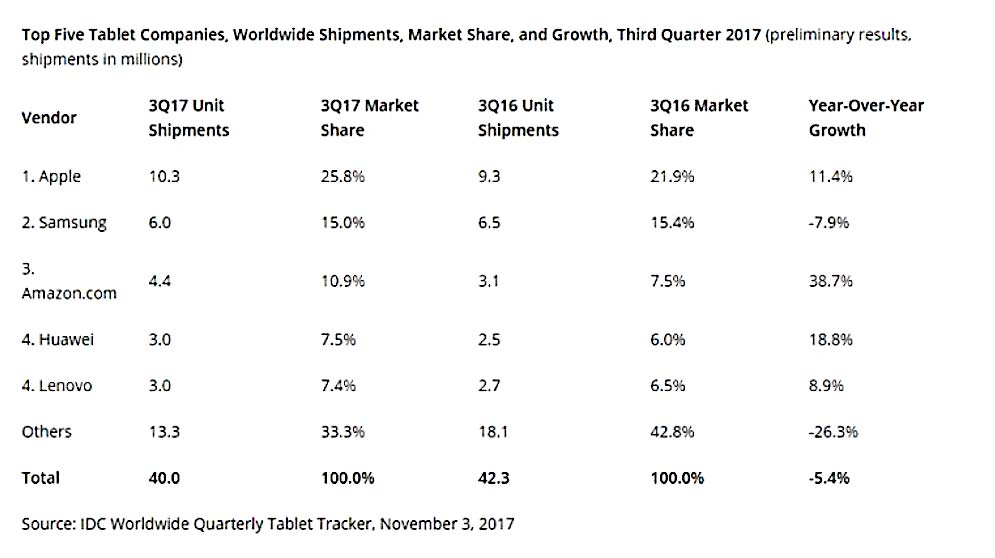 So far, Apple remains the market leader with a total share of 25.8% (14% increase). Samsung retains 15% of the market, but this is 7.9% less compared to the same quarter last year. Samsung is the only brand in top 5 that lost its share.

The third place is a bit surprising – Amazon. The company showed an incredible quarter with a 38.7% growth and more than a million more shipped tablets. The success of Amazon is a result of the company’s loyal price policy.

As for other spots in top 5, Huawei fell one position down and currently shares the fourth place with Lenovo – they own 7.5% and 7.4% of the market respectively. In the third quarter, both companies shipped 3 million tablets.