Most Productive and Popular Smartphones

The end of the year always means that various rating websites draw conclusions and determine the best items in different categories. The same goes for smartphones and tablets. Of course, some customers don’t particularly worry about different device ratings, their main concern is their own opinion about a certain smartphone. But that won’t stop people from comparing one smartphone to another because it’s quite curious to know which one is the best. This is especially interesting for Android lovers because there are so many devices on that operating system, so you can’t help looking at some ratings to find the best one.

Speaking about ratings, there is a well-known app which is used for estimating smartphone productivity – AnTuTu Benchmark. The app has its own scale and point system. Obviously, once 2017 had arrived, it was time to declare the most productive smartphones of the previous year. Unsurprisingly, first two positions in this list went to iPhone 7 Plus (181.316 points) and iPhone 7 (172.001 points). It’s worth mentioning that top-10 doesn’t feature any smartphones from Samsung, HTC, Sony or LG. The spots from 3 to 10 are mostly taken by Chinese companies, like Xiaomi, LeEco or ZTE. This tells us once again that China is conquering mobile device market step by step. 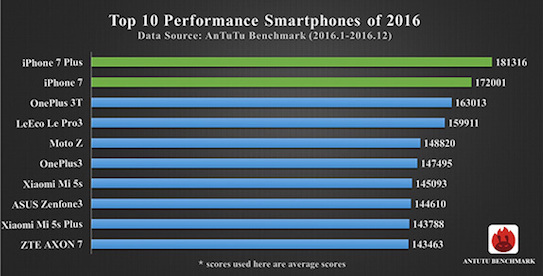 AnTuTu also made a list of top 10 most productive iOS devices. Here, the first spot is taken by 12.9-inch iPad Pro. In any case, we’re not saying that these ratings must be taken too seriously. Nonetheless, iPhone and iPad users can be happy with themselves – their devices are the most productive. 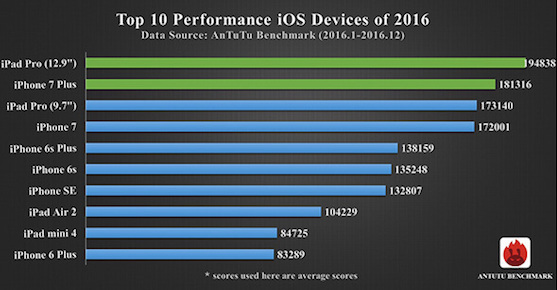