Home » LAPTOPS » MacBook Air vs MacBook Pro: Which One to Buy?
LAPTOPS

MacBook Air vs MacBook Pro: Which One to Buy?

When we talk about most productive laptops, we can’t help mentioning MacBooks. But which Apple laptop is the best? Feather-light MacBook Air or powerful MacBook Pro? Apple has already announced that it won’t update the Air line-up anymore focusing solely on the MacBook Pro. The latest release took place in October when the world saw new MacBook Pro with Touch Bar. But MacBook Air is still available everywhere, so we’re getting back to the question – which one should you buy? To find out, we picked several characteristics and compared both laptops.

The first and one of the most important aspects for choosing a laptop. MacBooks are quite famous for their incredible visuals, especially the models with Retina displays. Unfortunately, this isn’t the case for MacBook Air whose 13-inch display has ordinary 1440×900 resolution and 128 ppi pixel density. This pales to utter insignificance compared to Retina displays on MacBook Pro:

The 2016 MacBook Pro has an even wider color gamma and much brighter visuals.

In terms of productivity, MacBook Air is unsurprisingly worse. It is powered by an older, Broadwell Intel Core i5 (or i7) chipset with 8GB RAM and 128GB SSD (can be expanded to 256 or 512GB). The Pro models have SkyLake Intel processors (from 2 to 3.3 GHz), 8GB (16 in some 2016 models) RAM and storage capacity from 128GB to 2TB. Besides, MacBook Pro has better graphics with Intel Iris 540/550 or Intel HD Graphics 530 and Radeon 450/455/460. Obviously, MacBook Pro is the best choice if you’re concerned about multimedia.

This is an essential feature for any laptop. That’s why we have laptops – to carry them around and work on them on the go. Thankfully, Apple laptops are amazing in this department. MacBook Air even beats its competitor here with 12 hours of web browsing or 12 hours of video playback. 13-inch MacBook Pro is the closest to these numbers: 10 and 12 hours respectively. 15-inch MacBook 2016 isn’t much worse – 10 hours in both categories. So, MacBook Air is the winner here.

This is an interesting issue because the latest 2016 MacBook Pro lacks connectivity options. The cheapest model has only two Thunderbolt 3 (USB-C) ports while more expensive ones get two more. A USB-C port is used here even for charging. MacBook Pro 2015 and MacBook Air are more diverse here:

In this area, MacBook Pro doesn’t have an overwhelming advantage as the mobile accessory market is filled with all kinds of protective cases, bags and sleeves for both line-ups. Still, we may assume that there will be fewer MacBook Air accessories in the future. As mentioned before, this model won’t be updated anymore, so the demand on it will decrease pretty fast. Surely, companies will quickly adapt to the situation and we’ll see more MacBook Pro accessories. 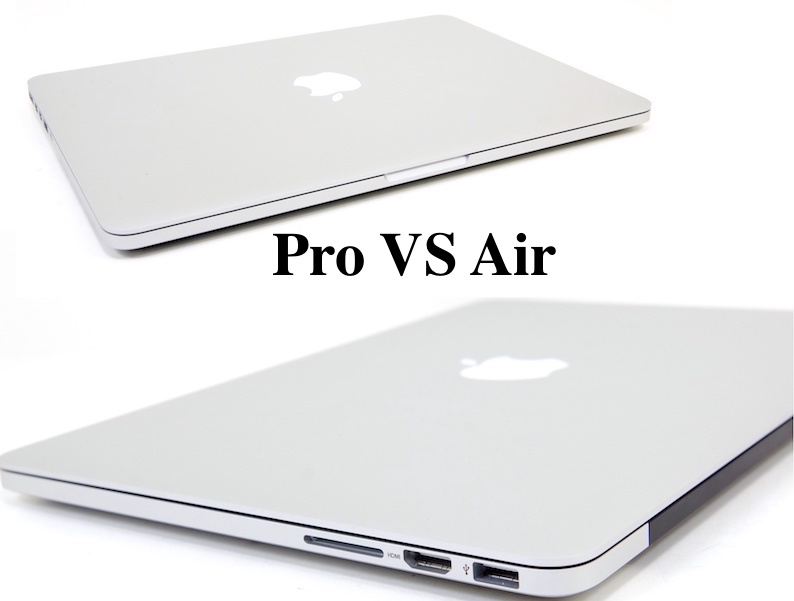 This, of course, is a sore subject because both MacBook Air and Pro aren’t exactly cheap. Nonetheless, if your budget is limited, MacBook Air seems like a more suitable variant. Its prices range from $999 to 1199$ depending on storage. At the same time, the least expensive MacBook Pro costs $100 more than the most expensive MacBook Air – $1299. But for those, who want more than 13-inch screen and 128GB SSD, there are other models with prices reaching up to $2799.

So, if you need an all-around device that performs great on all fronts, MacBook Pro is obviously a better choice. It’s more productive, supports “heavier” programmes and has much better visuals. One drawback – it’s very expensive. In case you’re looking for something cheaper, MacBook Air is for you. It won’t astonish you with its performance, it’s actually pretty old but it’s good for simple, office tasks. And considering its size and battery time, it’s a fantastic solution for travelers.

In the end, everything depends on your own needs and preferences. After all, both laptops are light, portable and, most importantly, made by Apple which is already a sign of highest quality. For more information about Apple product contact MelroseMac.

Apple Is Working on Its Own Graphics Chip