The company Logitech is usually associated with peripheral devices, like computer mice, keyboards, and so on. But even this accessory brand is influenced by modern tech tendencies. In fact, Logitech is currently making an interesting device called Logitech Bridge – Smart Gadget which connects VR with Keyboard. 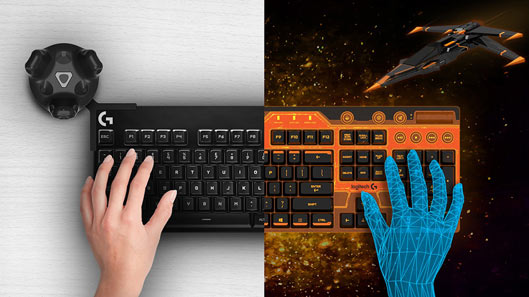 Logitech Bridge is a small hub that connects to HTC Vive VR headset using three other devices: Vive tracker, Logitech G gaming keyboard and a special accessory that “binds” the other two together. Once the system is set up correctly, a colorful 3D virtual keyboard models appears over the real keyboard.

Although VR is mostly centered around motion or gaming controllers, there are several apps, like VR desktops, which involve keyboards. In VR, where there is no keyboard under your hands, it’s not very comfortable to operate it. That’s where the Logitech Bridge system comes into action – you can easily make shortcuts and use hotkeys with actual keyboard buttons. Users can choose from several options for displaying the keyboard in a VR. Also, the software allows you to display only the keys used in keyboard combinations in the active program.

So far, the Logitech Bridge system is only available for developers for $150 without considering the costs for the tracker and HTC Vive. Developers can apply for one of 50 available kits.