Nowadays, VR industry is one of the most attractive areas for small, middle and major companies. The amount of VR gadgets is huge and all of them are unique. The same applies to the next product, called Taclim, which is now showcased at just opened CES 2017.

Taclim was created by Japanese company Cerevo and it’s a pair of highly innovative VR shoes. This device will be a great addition to any headset, providing users with a full VR experience. Due to numerous motion detectors and tactile wire systems, the VR shoes offer a rather tangible feedback communication. For example, when a user is playing a VR game and kicks a certain item or his virtual opponent, the collision between the leg and another object will be felt really well. The same applies to situations when the user walks on various terrains in virtual reality. Those, who have already tested the device, say that this feedback communication still needs improving but the company plans to deal with any flaws as soon as possible.

Taclim VR shoes will be available for purchase in autumn of 2017 for $1000-1500. Most likely, it will be an extremely specialized device. However, Cerevo’s president Takuma Iwasa sees one very promising application sphere for Taclim – advertisement of various services, especially entertainment. 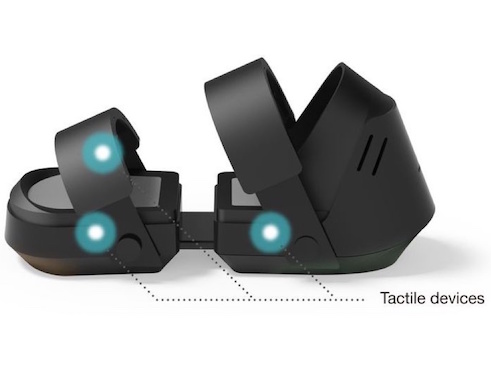