At the Google I/O 2017 conference for developers, which takes place in Mountain View, California, from May 17 to 19, Google introduced the next generation of its virtual reality platform, Daydream 2.0, code-named Euphrates.

According to the developers, Daydream Euphrates takes entertainment possibilities of virtual reality to another level. Plus, it will be easier to share content with other users. Daydream Euphrates is aimed at both smartphones and stand-alone VR headsets. Google already announced that new HTC and Lenovo headsets will work on Daydream 2.0. 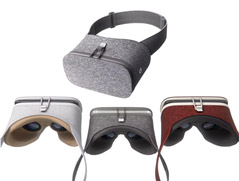 As for the changes, the Daydream 2.0 has a different home screen design – a control panel can be accessed in any app. Besides, new VR platform supports Cast: while one user is wearing a headset, the other user can actually see the picture on Chromecast-compatible TV in 2D mode. Plus, it’s possible to share screenshots and videos taken during a Daydream session.

Apart from that, Daydream finally features a full version of the web browser Chrome with the ability to surf the internet using a standard Daydream controller. In addition to web surfing, users can interact with WebVR-apps and watch videos in a full-screen mode.