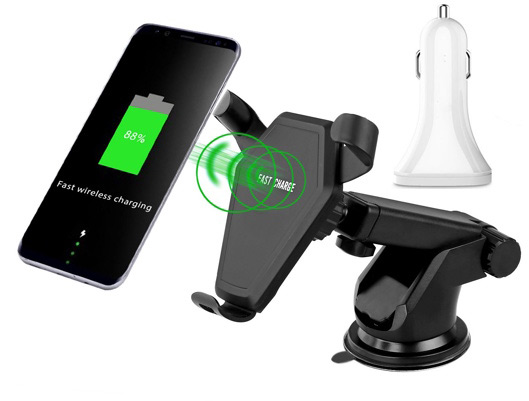 The Fast Charge is 1.4 times faster than the regular charge, is compatible with many popular smartphones such as Samsung Galaxy Note 8, Samsung Galaxy Note 5, Galaxy S6 Edge+, Galaxy S7, and many more that are Qi enabled. Standard charge works great with mobile phones such as iPhone 8/8 Plus, iPhone X, Samsung Galaxy S6 and S6 Edge, Nexus 4,Nexus 5 and Nexus 6, Nokia Lumia, HTC 8X and plenty more. For even more convenience in charging your mobile device, the package includes a double USB car charger. The charger is made with the newest technology and is equipped with Qualcomm Quick Charge 3.0 that charges four times faster than the regular. With that being said, charging two smartphones at the same time is possible.
Fast Charge wireless charger is durable, long lasting and best of all sets a safe driving atmosphere. As well as that, it works great not only in a car, but can also be placed in a room. Wireless chargers are items of the future, and we believe that soon everyone will start using them. So if you are one that is interested in the modern charging technology, we recommend that you take a look at it.