Fake iPhone 8 Made in China

Considering that iPhone 8 release is coming up soon (presumably, in September), the amount of rumors and leaks about the upcoming device is getting bigger and bigger. Just recently, the first unconfirmed production photos were leaked which clearly show the changed design of the smartphone. What’s more, a popular blogger DigitalChatStation published a photo of a device suspiciously similar to iPhone 8 that was depicted on the mentioned production photos. Everything looks like it’s the first try to make a fake iPhone 8. 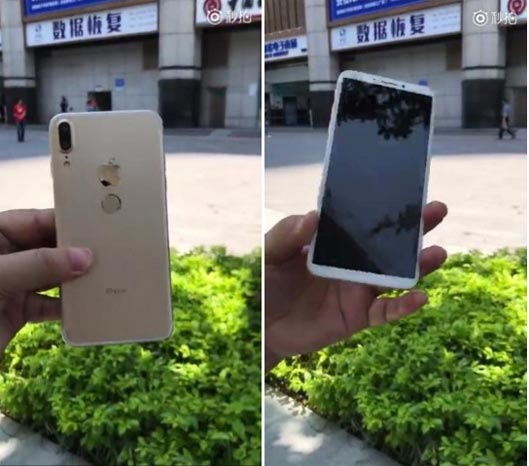 On the back of this mysterious device there is a classic but slightly enlarged Apple logo. Also, the device has two cameras, just like iPhone 7 Plus, but they are vertically aligned. If you compare the device to iPhone 7 again, you can see that the Home button has changed its position: it “moved” to the back panel of the smartphone, so that the display device occupies about 80-90% of the entire front side. In addition, the edges of the screen on this device are clearly bent as in Samsung smartphones.

Of course, this device doesn’t have any relation to real iPhone 8. This is an obvious fake created probably using a rather controversial leak. It is another Chinese clone of iPhone which, among other things, has also adopted some of Samsung’s design solutions. Therefore, we advise all reader to be careful and wait for official announcements from Apple.