During the last few months, there were rumours about Facebook expanding its video apps. Now, the rumours are confirmed – Facebook launched a new video service, or let’s say channel, called Watch. The service is called Watch provided as a video tab in mobile, desktop and television Facebook apps. The content is presented in channels (shows) with live or recorded materials divided into separate topics. 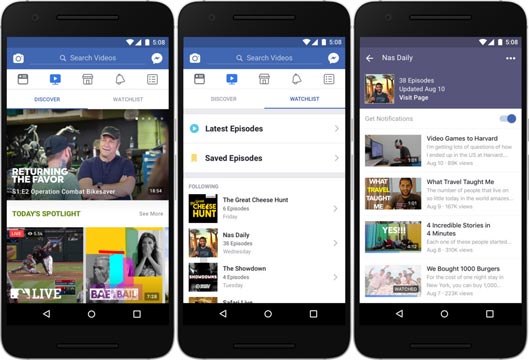 At the moment, Facebook opened the platform only for a limited range of content creators. The service is being tested by several users in the USA and will be gradually distributed around the world. Once the service is finally released, users will be able to experience its comfortable interface. For viewers on Facebook, a list of preferences is created, which allows you to monitor the appearance of new videos. There are also such sections as “the most discussed”, “what makes people laugh” (viewers can react to video with the “Funny” button), and “what videos are friends watching”.

Apparently, Facebook is trying to compete with YouTube which already has programs to support content authors and monetize videos via advertising. In time, Facebook will also use advertising breaks in the clips so that video creators could earn money from Watch. Finally, Facebook videos can be streamed to Chromecast and Apple TV making it even more versatile for viewers.