Disney isn’t just the company that makes movies and cartoons. Its department Disney Research experiments in certain areas combining cinematography with science and modern technology. Now, they came up with another interesting invention – a peculiar, “magic” bench and it’s best exciting Augmented Reality. Here is brief review of new AR technology. When a person is sitting on it, an animation character appears and the person will be able to interact with it. 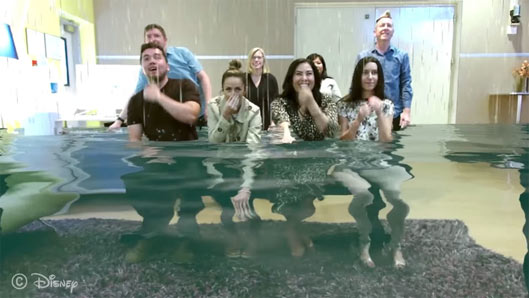 Unfortunately, you won’t see the character in reality – only on the screen opposite to the bench. Basically, it’s like looking at the mirror, only it will have an animated companion that you can communicate with and feel its movements. The system is quite simple – a depth sensor, a camera and special algorithms that calculate body positioning of the person sitting on the bench. After that, the system puts an AR cartoon-ish character right beside you on the bench.

The physical interaction with the character is peculiar. For instance, the shadows casted on virtual objects are real, and if you put your hand behind it, the hand won’t be visible, as the algorithms will cover it. Animated animals become even more realistic due to vibrating motors and speaker built into the bench. For instance, they can imitate sounds of the animal, like a snoring elephant. The character can even talk and its voice will come out of the speakers. The AR bench has already been demonstrated to the audience, and it may be used in the future in Disneyland amusement parks.