Website Kickstarter is a global platform for creative people who want to realize their dreams and demonstrate their products. Some projects don’t have much success, while others become popular instantly. Kickstarter is full of interesting and even unique products, and one of them has caught our attention – SPUD, a collapsible, 24-inch display from the company Arovia.

It’s pretty obvious that displays aren’t the most portable mobile devices. Most of the time, people carry around laptops, tablets or smartphones but sometimes you need a wider screen. In these situations SPUD or Spontaneous Pop-Up Display comes in handy. The display features the same metal construction, which you get in umbrellas, a projector and the screen itself. The latter is made of vinyl, so no wrinkles appear even after the display has been used multiple times. By the way, when folded, SPUD is unbelievably compact, like a notebook (only 19sm long).

A 24-inch display provides fantastic imagery. A built-in projector provides the brightness of 350-785 nit and 1280 x 720 resolution. Plus, the display is equipped with a monophonic dynamic. SPUD works on batteries which last from 3 to 6 hours, depending on the brightness you’ve chosen. The device is also fitted with HDMI and USB ports for connecting other mobile devices.

In our opinion, SPUD seems like a very promising product. To learn more about it, visit its official Kickstarter webpage. If you want to order the product now, it will cost you $349. However, the price will be even higher after the release of the display, which is expected in June, 2017. 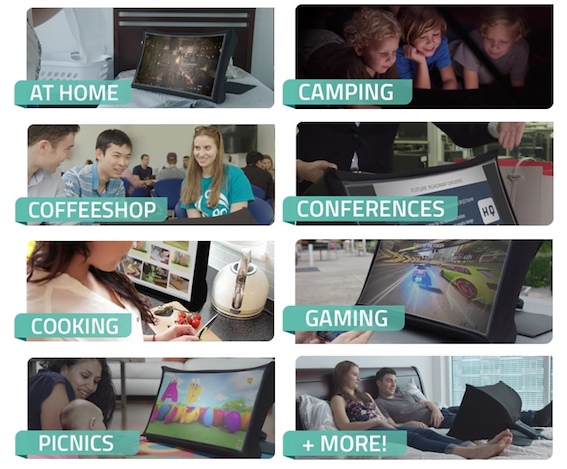 Wider Display for your Mobile Devices