The Hololens from Microsoft is a fantastic headset which uses the augmented or mixed reality technology. But it has one serious disadvantage – the price. $3000 will hardly attract a broad audience. This gave a group of British enthusiasts an idea to create a much more affordable device to experience mixed reality.

The result of their hard work got the name ZapBox and it costs only $30. But why is it so low? And how does it work? First, you need to place special pointcodes in the room. Having downloaded the ZapBox app (available for iPhones and Android devices), you use these pointcodes to build a map on your phone. After that, you put your phone in the headset, take printed, black-and-white controllers and use them to interact with the mixed reality. By the way, to widen the view of your camera, you’ll have to attach a special lens on it. The result is an immersive experience with virtual world.

Using ZapBox and two paper controllers, you could play a little xylophone, play mini-golf, paint 3D pictures, investigate the Mars or play a dancing game. Manufacturers provide a full access to SDK for those who want to create more programmes for this device. So, we may expect the software update pretty soon.

To support the project, click visit Kickstarter. Manufacturers have already raised $26.000 of the pledged $30.000, so ZapBox is most likely to hit the shelves pretty soon. 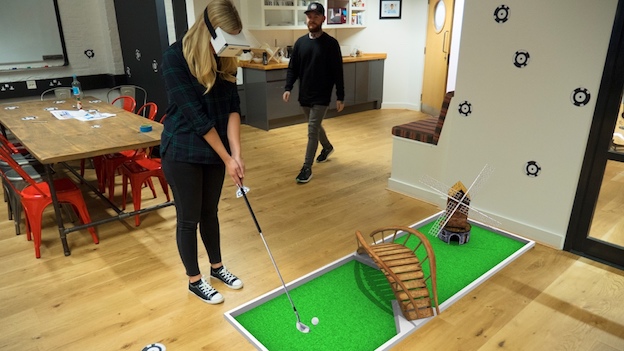