A portable projector is a must have for classroom teachers, tutors of big groups on different courses, and university lecturers. It would also be handy if you run any sort of public place where it is possible to hold movie screening, public lectures, etc.. Even a crew of corporate coaches would win from having one’s own projector: it is always better to keep your own gadgetry around than to rely on the hosts.

If you are a kindergarten teacher and have a portable speaker paired up with a pocket projector – you are good to go and have more than an hour of kid’s attention. If you plug in a powerful projector to display fancy movies all night in your café – the visitors are gonna stay in. 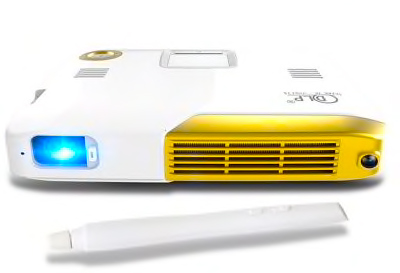 As for this particular projector, I would characterize M15 Portable Business Home Touch 3D Projector as a well-priced and wisely constructed device.
This is a professional smart projector, equipped with 2G storage 8CPU+8GPU processor and Android system, with very fast running speed. It can run the large software game in Android system and it also supports projection in the 300 inch screen, screen HD.
To add to that, this projector also has the function of shutter 3D. It has photoelectric induction double lens and automate keystone correction.
What is particular about this model is that it supports screen handwriting, and painting point reading, allowing you not only to show materials, charts and texts, but to work with them in real time.

M15 is a LED projector that can support throwing, back projection, desktop and ceiling. It has 2500 lumens, 1920 x 1080 resolution and 15000:1 contrast that make the picture clear and bright. It is also capable of 1.5x zoom.
A big advantage is that it weighs less than a kilo – you can easily carry it in a backpack. Finally, the projector is also stuffed with Bluetooth and WiFi, as well as has a speaker, making it an almost autonomous device.
To sum up, this projector will serve well both if you purchase it for home theater and if you need it for work, combining vast field of features and affordable price.

Apple Will Make a Flexible Smartphone