Blackview BV6000S MTK6737 Smartphone is a 4.7 inch wide gadget (almost a phablet) with good functionalities for its price. The device has 16GB ROM which is not too much, but it would suffice as long as you do not need to keep 5,000 apps. The smartphone operates on MT6735 Quad-core 1.3GHZ processor which gives it enough capacity to stream the net, videos, and send messages.

Moreover, with 8MP rear and 2 MP front, it would take acceptable photos. The screen is a bit smaller, from the other hand, the display may be brighter knowing the simple fact that that the unit is mainly created for outdoor use. The intelligent power management system aids the phone battery to improve efficiency, and subsequently, improves battery life. Nonetheless the gadget appears quite good in the utilitarian type of a manner. 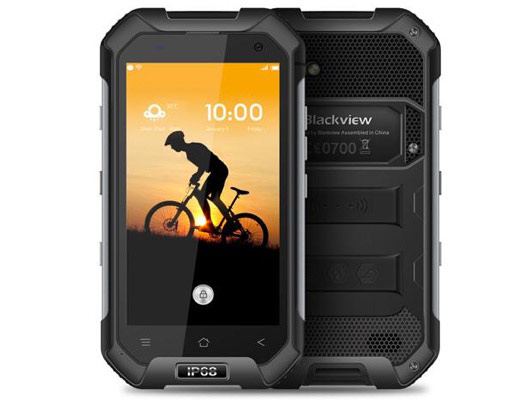 Also, it supports NFC. The unit also has quite numerous physical buttons on either side, which makes it a lot easier to use when submerged. However, what really makes the phone stand out is that it is totally water and shockproof which will make it a reliable companion in the journeys. And another cool feature, made specially for extreme mountain climbers, the smartphone has a built-in pressure sensor.

By pressing just 1 key, you will be up-to-date. Additionally, the device supports NFC, so you can pay and travel with it. 4200 mAh battery will reliably support you for long. Blackview BV6000S is a rugged phone that’s actually pretty excellent, and it fits in one of these niches, targeting the increasing number of smartphone users that are looking for something a little more resistant than your customary phone.