It seems like Apple is taking new steps towards the future. According to Patently Apple, the company patented the table for wireless charging of mobile devices. Although the idea sounds innovative and original, it isn’t new – earlier IKEA introduced a similar piece of furniture.

The patent application, named Virtual Charging Zone, was made already in 2013 but it’s just been approved by the US Office for Patents and Trademarks. The application states that the table will mostly resemble a regular piece of furniture but the surface won’t be even. In some places, there will be concealed magnetic field generators. That’s what will charge mobile device without using any cables.

Wireless charging tables are expected to appear both in Apple stores (as a décor element) and in Apple fans’ homes. Earlier, the news popped up about the agreement between Apple and the company Energous, engaged in wireless charging technologies. So, Apple is likely to acquire exclusive rights on the wireless charging chip that will be used in mobile devices. The chip is quite compact, so it won’t affect the size of iPhones or iPads.

The approval of this patent application shows one more time that upcoming iPhones will support wireless charging. Plus, in the future we may see many more similar devices. The time of cables and wires is coming to the end. 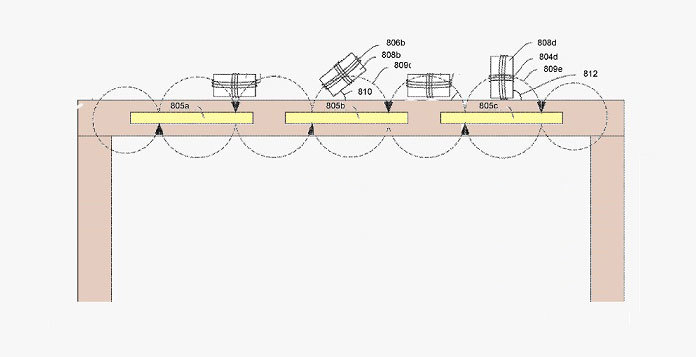