Just as expected, during WWDC 2017 conference Apple presented several novelties but one really stood out – it’s a music smart speaker Apple HomePod. This is a completely new product for the company but it’s definitely a step to catch up with other popular brands in this area, such as Amazon or Google.

Apple HomePod is positioned mostly as a device for listening music but it still is integrated with the voice assistant Siri. The speaker is activated with a familiar phrase “Hey, Siri” – the speaker hears the voice and understands commands very accurately. Also, HomePod can be used for searching information on the Internet.

The height of the HomePod is only 7 inches – less than iPad mini. Under the cover there are seven concealed downward drivers and a powerful proprietary subwoofer for creating clear bass without distortion. Six microphones catch the voice of the user recognizing individual timbre. All data is processed by Apple A8 processor. HomePod scans the space and adjusts the sound to a specific environment, creating an effect of surrounding sound.

In addition, HomePod works with HomeKit devices – users can, for example, turn the lights on and off, operate heating and household appliances. HomePod will be available in the U.S., England and Australia in December this year for $349. 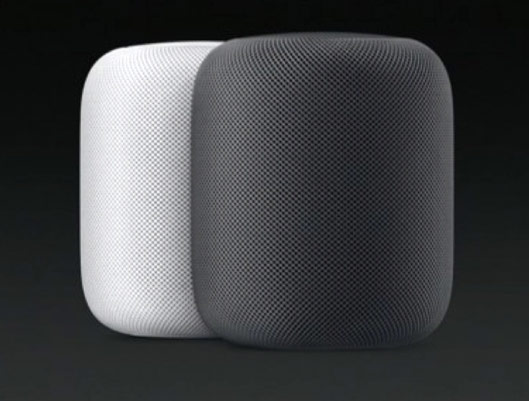